Back to all posts

Opportunities for neobanks and eWallets

For most of us, having a bank account and paying for goods and services with debit or credit cards is a given. However, there are more than 1 billion adults that still remain unbanked or underbanked.

But what do really these terms mean, and why are these people not using traditional banking services and products? In the following lines, we will give an answer to these questions and provide solutions for expanding financial inclusion around the world.

To begin with, you can see the unbanked population of each country presented in millions on the interactive map below.

What is the difference between being unbanked and underbanked?

The term unbanked is used to describe people that do not use traditional banking services of any kind. They also lack pensions, insurance, saving accounts and other advanced financial products. However, they might use alternative financial services such as prepaid cards and payday loans if such are presented to them.

Underbanked adults and households usually have a basic bank account but depend heavily on alternative financial services. Some of the reasons for underbanked societies to avoid traditional banks include inconvenient locations, high fees, personal preferences, and distrust in banks.

The unbanked population around the world

Even though there is a trend that more and more people are getting access to banking services, there are more than 1 billion unbanked adults, according to the Global Findex data from the World Bank. Most of them are located in seven economies – China (13%), India (11%), Indonesia (6%), Pakistan (6%), Nigeria (4%), Mexico (3%) and Bangladesh (3%). 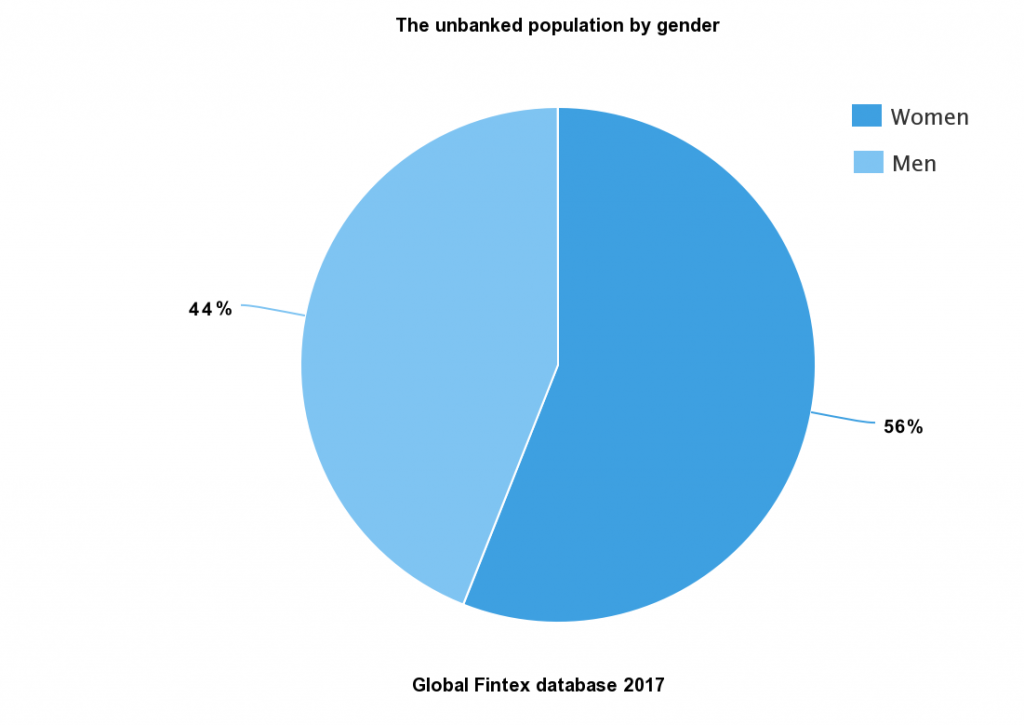 Another interesting fact is that the bigger portion of the unbanked adults are women. They represent 980 million or 56% of all unbanked people worldwide. This shows another outcome of gender inequality on the labor market.

Furthermore, half of the unbanked population are coming from the world’s poorer households. Twenty-seven percent are located in the first quintile, and twenty-three percent are in the second quintile. The data shows that the smallest group of unbanked adults is presented by people from the richest households (the fifth quintile).

A thread that unbanked adults also have in common is that a big part of them have low education level such as primary education or less. Only about 38% of this group of people have a high school or postsecondary education.

What are the reasons for people to remain unbanked?

Not having enough income to open a bank account was given as a top reason for remaining unbanked, according to a survey conducted by the World Bank. Around 70% of the surveyed people marked the lack of enough money as the main reason, and every fifth person gave it as their only reason.

A bit over one-fifth of the respondents stated that financial institutions are too far as an excuse for not using such services. In some countries, this portion was even higher from a local perspective. For example, in Brazil, Kenya and Indonesia the percentage is 33 and in the Philippines – 41 percent. 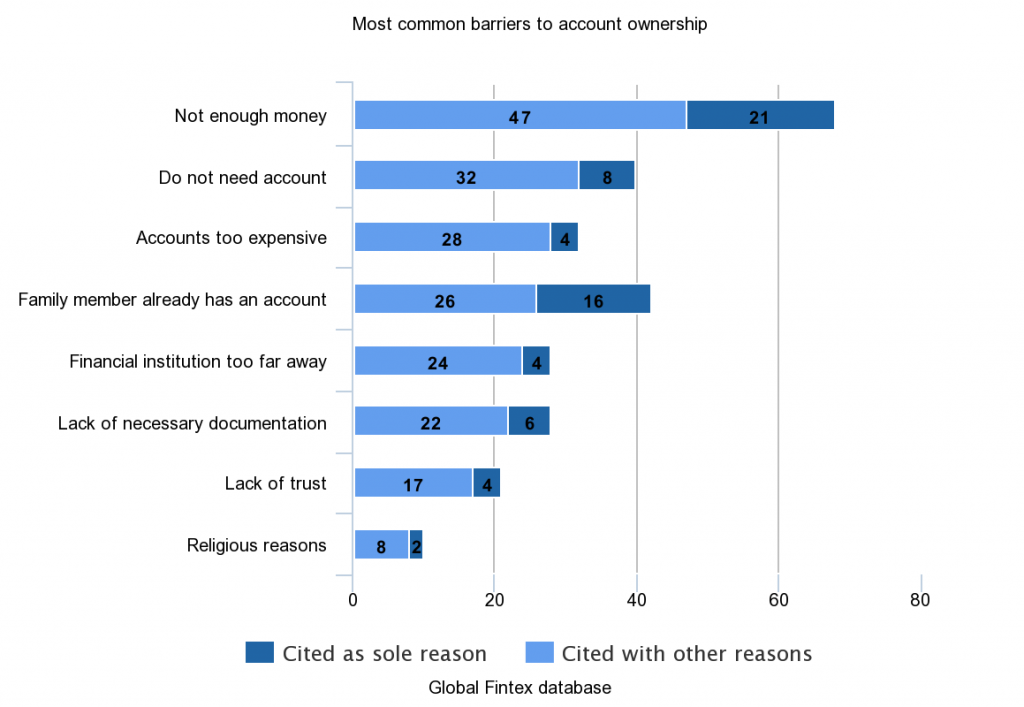 Do not have the proper documentation

Do not trust banks

Around sixteen percent of the respondents, globally, said that the lack of trust and protection of their private data is a reason for them to not own a bank account.

There were inconsistencies between the data in different regions, as the percentage was twice as high in Europe, the Caribbean, Latin America and Central Asia.

Disadvantages of being unbanked

To be unbanked comes with higher expenses than having a traditional bank account. Even though unbanked adults consider banks to have higher fees and a lot of hidden costs, alternative financial institutions have more expensive services.

Queueing at exchange shops for sending international transfers also come at a high cost, both money and time. Usually, these shops are used by immigrants who want to send remittance to their families back home and are quite popular among the unbanked adults.

Another big disadvantage of being unbanked is the lack of credit history. In order to receive a credit from the bank at reasonable rates, credit history is required. Being unbanked prevents such individuals from getting a bank loan.

Moreover, the lack of credit history can also lead to further problems with employers, landlords and utility companies as in some countries this is a prerequisite for obtaining their services.

Having a savings account is difficult for many banked adults, but for the unbanked, it is even harder. Not having savings in times of emergencies and unforeseen costs can further deepen the financial struggle of the unbanked households.

How fintechs and banks can solve the problem

A lot can be done to bank the unbanked, and everyone in the financial market can jump into the fierce competition for their attention. With the increasing ease of access to technologies and mobile services, everyone now has access to the internet, which gives financial institutions endless possibilities.

Some of the most probable solutions that can lead to greater financial inclusion remain:

To reach this niche and turn them into customers, banks, fintechs and regulatory institutions should partner up and come up with convenient and accessible new products that can answer the needs and desires of the unbanked. Of course, it is all possible as digital solutions are the future of the financial sector.

SEPA Cyber has all it is needed to help businesses build their own digital wallet, exchange platforms, neobanks and produce credit and debit cards. With our core banking system and additional services, the establishment of digital-only banks becomes possible in 3 to 6 months.